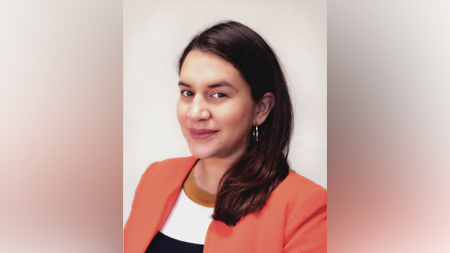 Maria Alcívar Zúñiga, a doctoral student in human development and family studies, has been honored with the K. Patricia Cross Future Leaders Award from the Association of American Colleges and Universities. The award cites Alcívar Zúñiga for showing exceptional promise as a future leader of higher education, as demonstrated by her innovative approach to student learning, commitment to equity, and contributions to communities on campus and beyond. Alcívar Zúñiga is one of seven graduate students nationwide selected for the award from among more than 200 applicants.

Originally from Ecuador, Alcívar Zúñiga is an immigrant who was once undocumented. Her doctoral research centers on immigration policy and the health and well-being of Latinx families. She has worked with ISU Human Science Extension and Outreach research programs, including Rural Family Speak about Health Project, JUNTOS: Para Una Mejor Educación, and Abriendo Caminos. She was also recruited to develop a new ISU Extension and Outreach curriculum, ¡Salir Adelante! Caminos a Nuestro Futuro (Pathways for our Future). In 2018, she was invited to work with a bi-national research project titled ‘Health and Well-being of U.S. Children of Deported Parents,’ which was funded by the National Institutes of Health. is also actively engaged with the Latinx community across the state and has served as an advocate for immigrant rights since she moved to Iowa in 2008.