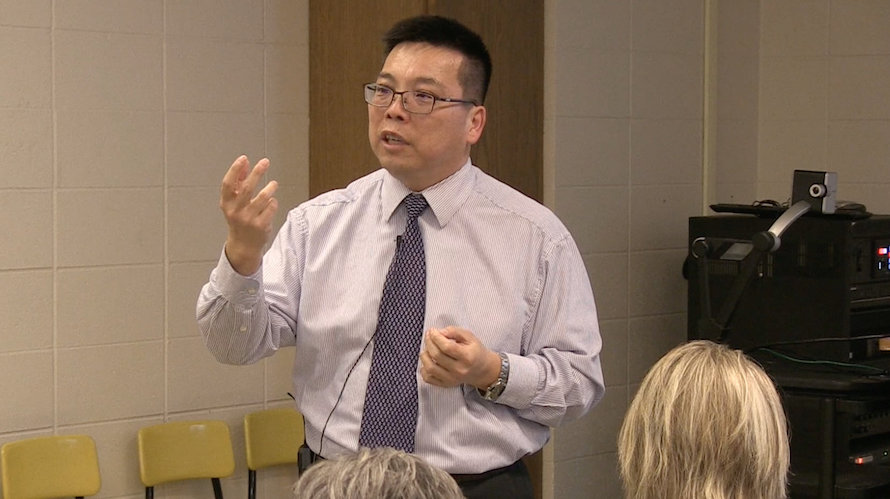 Li-Shan Chou, a professor of biomechanics who is department head of human physiology and director of the Motion Analysis Laboratory at the University of Oregon, will be the next chair of the Iowa State University Department of Kinesiology. Screen shot of video by Ryan Riley.

Li-Shan Chou, a professor of biomechanics who is department head of human physiology and director of the Motion Analysis Laboratory at the University of Oregon, will be the next chair of the Iowa State University Department of Kinesiology. He begins July 1, 2019.

Chou’s selection was announced Tuesday by Laura Dunn Jolly, dean and Dean’s Chair of the College of Human Sciences.

“Dr. Chou brings experience as a department chair, a successful record of research and grantsmanship, and a strong vision for working collaboratively with faculty, staff, students, and partners to move the department forward,” Jolly said. “His varied educational experiences and commitment to innovative programs make him a strong advocate for excellence. I am confident that Dr. Chou will provide exemplary leadership for the Department of Kinesiology.”

Chou will succeed Phil Martin, who has served as kinesiology chair since 2008. Martin will continue as chair until Chou begins his appointment next summer.

Kinesiology has the third-largest undergraduate student enrollment on the Iowa State campus, enrolling about 1,200 students who learn from and collaborate with about 30 full-time and 20 part-time faculty members.

New leadership of the department was announced on the heels of Iowa State celebrating $7.4 million in renovations of the Barbara E. Forker Building, home to the Department of Kinesiology. The renovation includes state-of-the-art research laboratories; a new office complex; and new spaces for students to study, meet, or get together.

Chou brings to Iowa State expertise in the area of biomechanical analysis of human movement, orthopedic biomechanics, and rehabilitation engineering. He applies engineering and mechanical theories to enhance the understanding of mechanisms governing human locomotion and factors related to the increased incidence of falls in the elderly. His areas of expertise include clinical gait analysis, assessment of dynamic stability during locomotion, and mathematical modeling of the musculoskeletal system.

“One type of research I am doing is related to brain function, concussions,” he said. “Any injuries in the brain may be reflected in the way you perform. I was one of the first of few people in biomechanics who tried to use walking as a paradigm to detect the recovery from concussions, from brain injury. I’ve been doing that for almost a dozen years.”

Biomechanics — the application of physics and engineering to the human body, looking at the stresses, strains, and forces inside the human body as people exercise — is also an area of specialty at Iowa State. The biomechanics research lab in 178N Forker is a 1,750-square-foot facility that is part of the human performance laboratories housed within the Department of Kinesiology. Researchers in the biomechanics lab include kinesiology associate professor Jason Gillette and professor Tim Derrick, who led the search committee for the new kinesiology chair.

A liaison who believes in transparency

Chou was born and raised in Taiwan. He received his bachelor’s, master’s, and doctoral degrees all in mechanical engineering. He worked as a researcher at the University of Chicago and Mayo Clinic before joining the University of Oregon Department of Human Physiology in 2000. He has received research grants from the National Institutes of Health, Mayo Foundation, Medical Research Foundation of Oregon, and the Centers for Disease Control and Prevention.

During an open forum at Iowa State, Chou described his leadership style as collaborative.

“I’m a human person. I am a team player. I like teamwork. And certainly, a department chair still also has 24 hours a day like every one of you, so I love to delegate the responsibility to my team. When I make delegations, I trust that person,” he said. “If you are willing to put yourself in other people’s shoes and think from their perspective, people will collaborate with you and there will be harmony in working together.”

Chou said being a department chair is a challenging position that answers to faculty and students in the department, as well as to the college dean and university administrators.

Mission to promote health and well-being

Chou said he embraces the department’s mission to promote health and well-being, and to create and disseminate knowledge about physical activity and healthy living, to improve people’s lives. He said Iowa State University already has one of the best kinesiology programs in the nation. As chair, he’d work to make it one of the best in the world.

“What excites me about the job — the department is rooted in physical education but you know what you want, you want to promote the science of physical activity,” Chou said. “You want to be a leader in athletic training and you want to connect it to health science. Physical activity has played a very significant role in disease prevention. This area excites me.”

By Lynn Meadows and Cathy Curtis

Li-Shan Chou, a professor of biomechanics who is department head of human physiology and director of the Motion Analysis Laboratory at the University of Oregon, will be the next chair of the Iowa State University Department of Kinesiology.

“I’m a human person. I am a team player. I like teamwork. And certainly, a department chair still also has 24 hours a day like every one of you, so I love to delegate the responsibility to my team."
Li-Shan Chou