Branching out as a registered dietitian nutritionist 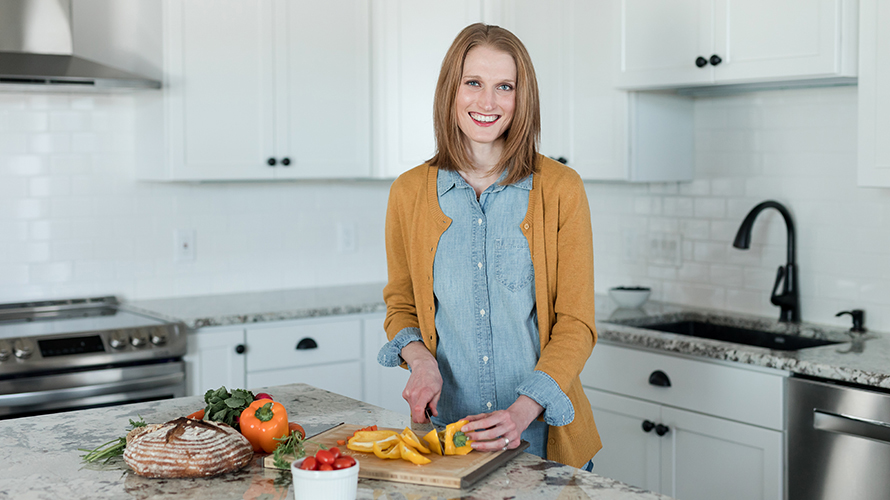 After spending five years as a retail dietitian, this Iowa State alumna decided to pursue her passion of helping families and individuals with their nutrition through her own private practice.

Kara Hoerr (’10 BS dietetics, ’12 MS nutritional science) launched her private practice, Kara Hoerr Nutrition, in February of this year. The decision was based on her desire to focus on her two passions in dietetics:

As a nutritional coach, Hoerr guides her clients in selecting food that not only tastes great, but also makes them feel good. This does not mean she tells clients to eat all the donuts and cookies they want while skipping fruits and vegetables, but rather encourages them to be more mindful of their food selections.

“I genuinely care about my clients and want to give them the best information and advice I can,” Hoerr said.

The feedback from her clients is what drives her motivation and investment in her work.

“I love the daily interaction with my clients, and the relationships I’ve built with them aren’t something you would see in a hospital setting,” Hoerr said. “It’s rewarding to see their diets change and hear how much better they feel.”

Looking back, Hoerr said the success she has found in the dietetics field would not have been possible without the education and guidance she received at Iowa State. Notably, she credits her freshman year community adviser for introducing her to the dietetics major.

“She had a huge impact on me,” Hoerr said, who came to Iowa State as an open option major. “I switched to dietetics and my interest in food and nutrition grew from there.”

“Hands down, she’s an awesome person,” Hoerr said of Oldham. “Whenever I went to talk to her, she made me feel as if she had all the time in the world dedicated to me. She helped guide me, in a gentle way, in the right direction.”

Hoerr was the first graduate student Francis had after joining the faculty at Iowa State.

“She allowed me to see the potential I had in becoming a community dietitian,” Hoerr said of Francis.

Hoerr’s enthusiasm for nutrition and cooking was evident to Francis in the personal blog Hoerr set up after starting her professional career. It came as no surprise when Francis learned Hoerr had begun her own business.

“I always suspected Kara would branch out on her own,” Francis said. “She’s creative, motivated and determined. I have no doubt her clients will love working with her because she will help them capture the same kind of enthusiasm to make healthy lifestyle choices because they want to, not because they have to.”

Hoerr encourages aspiring registered dietitian nutritionists to go after what they love and pursue their passions, even if they have doubts.

“A lot could have kept me from starting my own business, but I didn’t let it stop me,” Hoerr said.