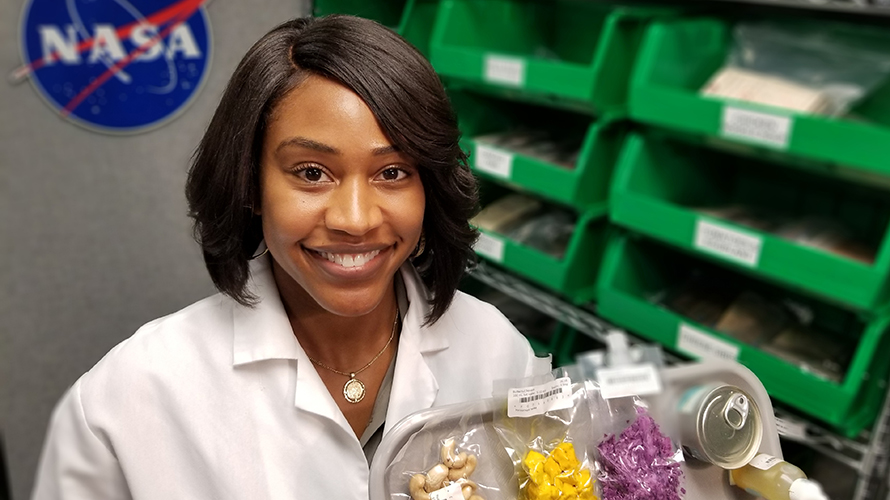 Developing safe, nutritious meals to fuel astronauts’ space exploration is no easy task, but Takiyah Sirmons is using her food science degree from Iowa State to take on the challenge.

Sirmons (’08 food science), began her journey to becoming a food scientist when she took part in Iowa State University’s George Washington Carver Internship Program as a high school student from Oxon Hill, Maryland. She entered the summer-long “science with practice” program as a forestry and plant pathology intern, but soon became interested in food science after seeing the work fellow interns were doing in that area.

“By the end of that summer, I knew I wanted to pursue a degree in food science and Iowa State was the best fit for me,” Sirmons says.

Following her time at Iowa State, Sirmons went on to earn her doctorate degree in food science and technology at Virginia Tech. She later accepted a food scientist position at ConAgra Foods in Omaha, Nebraska, where she spent a year reformulating Chef Boyardee brand pastas.

In pursuit of a more research-based position, she came across a job posting for a food scientist in NASA’s Space Food Systems Laboratory at Houston’s Johnson Space Center.

“I wasn’t entirely sure what that entailed at the time, but understood space exploration was extremely challenging and a lot hinged on the crew’s ability to obtain proper nutrition from the food system,” Sirmons says. “I viewed the position as an opportunity to contribute not only to my field, but also to my country.”

Read the rest in STORIES