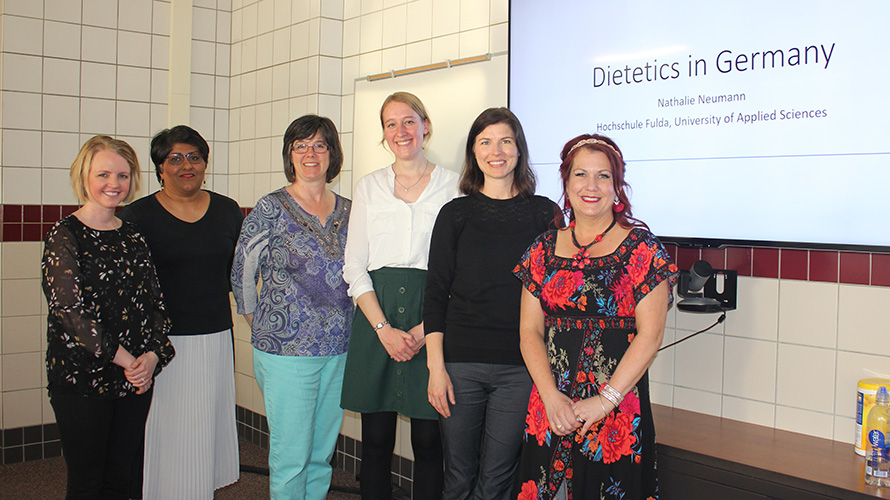 Nathalie Neumann a dietetic student from Germany spent the month of April in Ames learning about American dietetic practices. She was hosted by Iowa States Dietetic Internship Program and is pictured with faculty in the program left to right Nicole Tramp Mridul Datta Laurie Kruzich Neumann Erin Bergquist and Alison St. Germain. Photo by Whitney Sager

Nathalie Neumann, a dietetic student from Germany, has been on a journey to discover the differences between German and American dietetic practices. 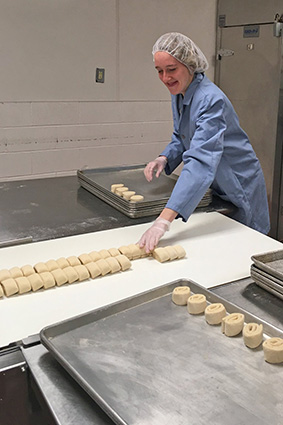 Iowa State University’s Dietetic Internship Program was selected to host Neumann during her time in Ames.

“We were thrilled to be selected as the pilot site for the first Global Nutrition Exchange,” said Erin Bergquist, senior clinician with the Dietetic Internship Program. “Our program has a strong commitment to engage in international nutrition. We’ve partnered with Alice Wimpfheimer-Guggenheim and the Academy Foundation in the past and have always found it to be a valuable partnership.”

During her time in Iowa, Neumann visited a variety of settings where dietitians practice to experience what they do and to see how American dietetic practices differ from those in Germany. She spent time with ISU Dining, ISU Extension and Outreach, Mary Greeley Medical Center, Green Hills Retirement Community, Des Moines Public Schools, Women, Infants and Children (WIC) program, Hy-Vee, and the Iowa Academy of Nutrition and Dietetics during Legislative Day.

“I was hoping to provide a well-rounded experience so that Nathalie could get a feel for some of the main settings dietitians work in within the United States,” Tramp said.

Some practices Neumann noticed to be different between American and German dietetics are: 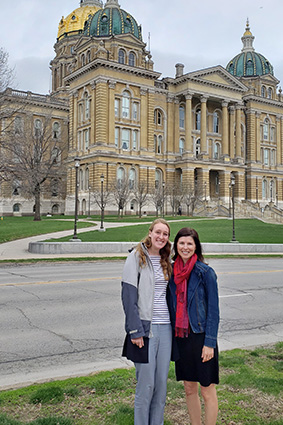 “It’s so interesting to see things you think are normal are so different in other places,” Neumann said. “We’re all dietitians, but our backgrounds are different, and it’s good to see how dietitians practice in other countries.”

Neumann also presented about how dietetics is practiced in Germany to local dietitians and the campus community.

“It was fascinating to learn about the similarities and differences in our profession,” Bergquist said. “I especially liked Germany’s focus on culinary skills and meal preparation.”

Following her time in Ames, Neumann will spend a week in Portland, Oregon, where she will gain further insight into how dietetics is practiced in the U.S.

Neumann then will return to Germany where she will complete the final semester of her dietetics program. She hopes to one-day use her dietetics degree to research childhood nutrition.

Neumann encourages other dietitians to become familiar with dietetics practices around the world and hopes the Global Nutrition Exchange will continue to be offered in the future.

Bergquist echoes this sentiment. “It would be wonderful to see a dietitian from the U.S. travel to Germany to experience first-hand what the dietetics profession offers in Germany. There is great potential for this opportunity to translate into new experiences for our students, as well.”

Nathalie Neumann, a dietetic student from Germany, spent the month of April in Ames taking part in the Wimpfheimer-Guggenheim Global Nutrition Exchange.

“We’re all dietitians, but our backgrounds are different, and it’s good to see how dietitians practice in other countries.” — Nathalie Neumann