Interning in ‘the big leagues’ 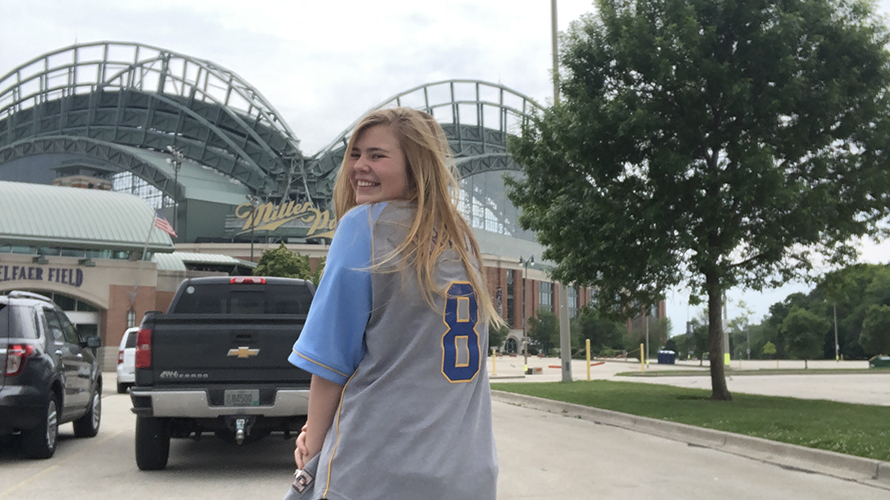 Dietetics student Anna Colagrossi spent the summer interning at Miller Park, home of the Milwaukee Brewers. She used the knowledge she has gained in her dietetics courses to help chefs make meals served to the team and fans healthier. Contributed photo.

An email inquiry turned into a unique internship for this dietetics student.

Anna Colagrossi, junior in dietetics, spent her summer as a culinary intern for the Milwaukee Brewers, a major league baseball team in Wisconsin.

“I was researching internships online and decided to reach out to the company that works at the stadium,” Colagrossi said.

Though the organization had not offered such an internship before, Colagrossi and a graduate student from a different university were given the opportunity to work with chefs at Miller Park, the team’s home stadium. Throughout the summer, the two students suggested improvements to be made to meals offered to Brewers players and the 40,000-plus fans attending games at the stadium.

“We suggested different things the chefs could do to make the meals healthier, such as substituting sugar for honey in some recipes,” Colagrossi said. “We also suggested ways to make meals more sustainable so the baseball players would have more energy.”

Highlights of her summer internship included meeting the Brewers’ nutritionist and leading her own team in the kitchen for a special event at the stadium. She used the knowledge she has gained in her dietetics courses to ensure food was cooked to the proper temperature, gloves were worn while handling food, and other food safety procedures were followed throughout the food preparation process.

After seeing the amount of unnecessary food waste at the stadium, the two interns decided to find ways to reduce some of the waste.

They began taking inventory of how much of each type of food was thrown away and if stadium attendees had any dietary restrictions. They determined more vegetarian options should be offered in place of some of the meat options that were not being consumed.

“The project went very well, as we accommodated the dietary needs and desires of consumers, so less food was thrown out or wasted,” Colagrossi said.

A baseball fan herself, though she admittedly roots for the Chicago Cubs, Colagrossi said she enjoyed the internship, and it was interesting to interact with a major league baseball team.

“It was exhausting, but worth it because I got nutrition management and sports nutrition experience,” Colagrossi said. “The people I interacted with made it all worth it.”