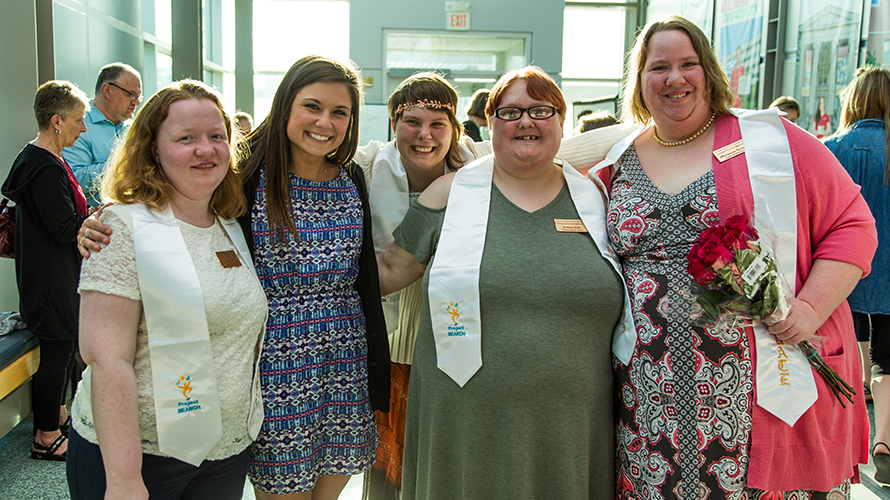 Sarah Brangoccio thought that by going into special education, she’d be the teacher helping students.

But then she got to know Amber Kirk, Adele Krier, Chloe Schmidt, and Marianne Russell, and found herself learning from them just as much as she was teaching.

“These adults with disabilities are coming in and learning alongside of me,” she said. “So now they’re my friends, they’re my peers, they’re my colleagues.”

Brangoccio, a senior in elementary education, first encountered the interns through her work in the Center for Technology in Learning and Teaching. They bonded and became quick friends.

“Definitely all of us interns have become really good friends. We tease each other a lot,” said Schmidt.

Brangoccio has a passion for people with disabilities. She believes it’s her job to give them the opportunity, or that little extra push, to bring out their abilities. She advises others to get comfortable with being uncomfortable.

“When you’re put in uncomfortable situations, you can learn from it. You learn your own biases, your own thoughts, how you do things,” she said. “Being around people with more diverse backgrounds makes you more conscious of your own background, your own ability — things I take for granted every day, but things I can still work to improve.”

Kirk, Krier, Schmidt, and Russell interned at Iowa State this past year through Project SEARCH, which aims to secure competitive employment for people ages 18 to 30 with disabilities. Iowa State’s program, led by School of Education senior lecturer Linda Lind, is offered campus wide this fall. The transition-to-work program was first implemented at Iowa State in fall 2016 by the College of Human Sciences in partnership with The Arc of Story County.

“While Project SEARCH is enriching the lives of people with disabilities, we believe these individuals enrich our campus just as much,” said ISU President Wendy Wintersteen. “We want Iowa State University to be a place where anyone — including individuals with disabilities — can reach their full potential.”

The interns graduated from Project SEARCH in April, and a new group began interning this fall. The thought of saying goodbye to Kirk, Krier, Schmidt, and Russell brought tears to Brangoccio’s eyes. “These are a wonderful group of people. I cannot imagine not having my last two years with them,” she said.

“They make the workplace better for sure, and to think that people wouldn’t want them in their workplace is just absolutely absurd to me. I just wish everybody would know that they’re as great as I think they are.”

Working with Project SEARCH interns, a program that aims to secure competitive employment for people ages 18 to 30 with disabilities, helped Sarah Brangoccio grow as a person.

“I think when you’re put in uncomfortable situations, you can learn from it. ”
— Sara Brangoccio