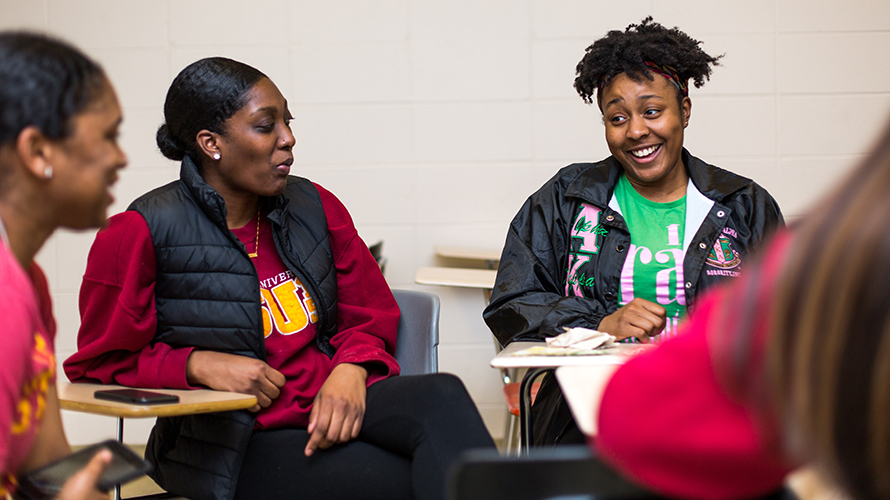 Kendra McGhee and Taylor Williams meet as members of The Kin Collective, which aims to build a stronger sense of community among students of color in kinesiology. Photo by Ryan Riley.

After graduating from Hoover High School in Des Moines, one of the most ethnically diverse schools in Iowa, Kendra McGhee came to Iowa State University and experienced culture shock.

About 13 percent of Iowa State’s student body of more than 36,000 are students of color. McGhee said being surrounded by white people made her feel isolated.

“It’s really wearing not seeing people that look like you, or people that you can relate to,” she said. “In my classes, people would talk over me or they wouldn’t listen to my ideas.”

Today, McGhee has not only overcome her fear — she’s become a leader among her peers. The senior in kinesiology and health is president of The Kin Collective, a new group that is building a stronger sense of community among students of color.

McGhee thanks her friends for helping her become comfortable in her own skin. She thanks programs like Science Bound, a scholarship program for multicultural students, for making sure she has appropriate resources. And she thanks kinesiology professor Warren Franke for creating a welcoming environment at Iowa State.

“He’s just very cognizant of his social identity and how that can affect other people with different social identities,” McGhee said. “Having interactions with people like that really helped me grow as a person.”

Faculty and students in kinesiology — dedicated to promoting physical activity, health, and well-being — say they recognize diversity is lacking in their field. The Kin Collective is one way they are working to address the issue. The group is the brainchild of Franke and graduate student Markus Flynn, a former president of the ISU Black Student Alliance and recipient of Iowa State’s 2016-2017 Brenda Jones Change Agent award.

“We felt that this organization could fill a void that the department was missing,” said Flynn, who along with Franke advises the group.

McGhee said recognizing that we each have privileges, advantages, and disadvantages as part of our social identity — and can each serve as advocates or allies — can help all students.

“It’s very important that everyone feels accepted and appreciated and valued,” she said. “We’re still treating people unfairly based on one part of who they are. There’s no reason for there to be marginalized groups — that’s a social construct that we created just to divide ourselves. Nothing is really accomplished if we’re divided.”

The Kin Collective reduces isolation among students of color and provides a safe space to share life's ups and downs.

“It’s very important that everyone feels accepted and appreciated and valued.” — Kendra McGhee