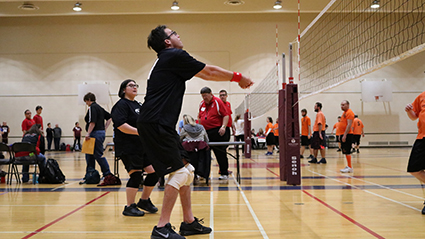 “Athletes seem to gravitate towards college age students in general. Lots of our athletes are passionate about this event because they’re Iowa State fans themselves and really enjoy the culture,” said Elin Phipps, Special Olympics of Iowa’s director of volunteers. “The college students always hype up the event and make the athletes excited to participate.”

Elin said the Iowa State students go out of their way to engage the athletes.

“The first year I worked the state volleyball tournament as a Special Olympics Iowa staff member I was so amazed at the enthusiasm and spirit the Iowa State students bring to the event. I remember a group of students serving as volunteers at the awards ceremony turned on music from their phones, held them up to the microphone, and deejayed the entire awards ceremony on the spot. Our Special Olympics Iowa athletes who were waiting for their awards broke out into a dance session for the remainder of the time — and it was very evident that they were all enjoying themselves!” She said. 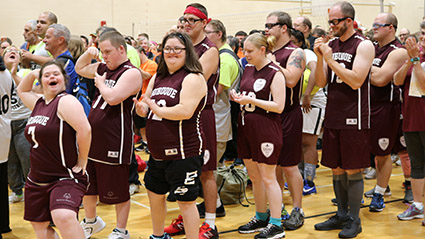 “It is a lot of fun to seem them (Special Olympics athletes) having fun,” said Jackson Culp, Iowa State Physical Education Club president.

Jackson first started volunteering for the event as part of a class.

“I actually had to volunteer through a class I had for my major, and it turns out that it was one of the coolest things I’ve ever been a part of. So I’m glad that I get to take on a bigger role this year,” Culp said.

The majority of volunteers come from the two Iowa State clubs. About 80 volunteers are needed for the event as a whole, since Special Olympics is a non-profit organization.

Future opportunities to volunteer for Special Olympics of Iowa events are available on their web page, under the ‘get involved’ tab.

“It is something everyone should try at least one time.” Culp said.

For years, members of the Iowa State University Kinesiology and Health and Physical Education clubs have volunteered at the Special Olympics volleyball tournament held annually on campus in the Forker building.