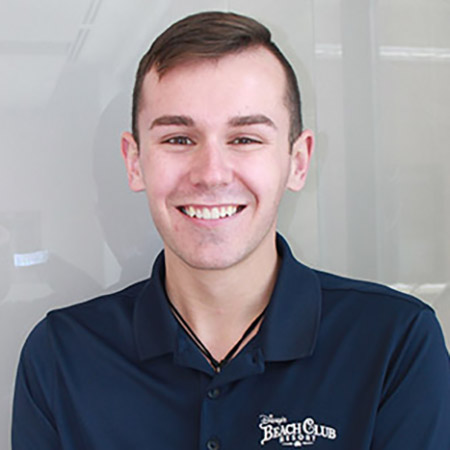 “You need to remind yourself why you’re doing this and why you love this so much.”

Get to know Cole

When searching for a college major, Cole Kramer took all of his skills into consideration. After narrowing down his strongest attribute — leadership — Cole realized that hospitality management would be a perfect fit for him. He chose to attend Iowa State University to study in its highly-ranked hospitality program while keeping close to home.

Cole quickly found himself thriving in his course work at Iowa State. Wanting to take his studies to the next level, he applied for an internship at Walt Disney World Resort in Orlando, Florida, and was accepted into the Disney College Program as a food and beverage cast member.

“[The resort] was not a traditional work space. I got the opportunity to venture out with cast members and coworkers to be an active part of making the Disney experience memorable,” Cole said. “The hardest transition I had was getting to know [my coworkers]. It was intimidating at first because Disney is so big, but I found friends there.”

While working full-time for his internship, Cole was also taking 23 credits online, some of them through Disney. His busy schedule taught him how to be self-disciplined and motivated to do his work, which contributed to his success in school.

Cole was exposed to many different styles of leadership during his internship, and came into his own as a leader himself. The Disney internship solidified his goal of becoming president of Walt Disney World Resort.

After seeing the happiness he was able to create for people at Disney, it motivated Cole even more to reach his goal. With his internship, he is able to put things into perspective for future hospitality management majors.

“Stuff happens. You’re going to get knocked down,” Cole said. “You need to remind yourself why you’re doing this and why you love this so much. Think about the goal and all of the moments that make it amazing.”

“You need to remind yourself why you’re doing this and why you love this so much.”