"I don't feel behind at all; if anything, I feel more prepared based on the coursework that I've taken because it's practical and can be applied so easily."

After graduation, Jace plans to attend medical school in the fall and eventually work as a practicing physician. In his free time he enjoys lifting weights, going on runs, and hanging out or get food with friends. When he wants to treat himself, he will cook some fish tacos.

Get to know Jace

Jace Leininger was immediately drawn to Iowa State University because of the many opportunities in and out of the classroom. He quickly immersed himself in clubs and organizations to get the most out of his experience.

“The pre-med club helped me in my preparation and application for medical school,” Jace said. “These experiences have developed me into who I am and have shaped my interests towards medicine along the way.”

After starting as a biology major, Jace quickly switched to kinesiology and health, where he realized that his coursework would be more applicable to his future career.

“I felt that kinesiology provided ways to apply what I learned in a practical setting that was unique to that department, which is why I made the change,” Jace said.

As a high school athlete, Jace was involved in athletics and used physical therapy treatments throughout that time. That ultimately led to his interest in health care, where he became a CNA and built rewarding provider-patient connections.

“I like interacting with people,” Jace said. “You have a unique relationship with someone [as a health coach or health care provider] who is coming to you for help with a problem in their life or something they want to change, and you have an ability to help them.”

Being involved in clubs and research helped Jace stand out when interviewing for medical school, as well as the learning experiences he took from Iowa State University.

“When I was studying for the MCAT, I didn’t have to touch on a lot because I had such comprehensive classes that were really good,” Jace said. “I don’t feel behind at all; if anything, I feel more prepared based on the coursework that I’ve taken because it’s practical and can be applied so easily.”

Although Jace is not sure what type of doctor he wants to be yet, he knows that working with kids is in the future.

“I value the position of being a role model, and I felt like I had some phenomenal ones when I was a kid,” Jace said. “I feel like I am obligated in a way to give back to the community.” 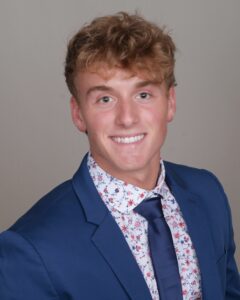 "I don't feel behind at all; if anything, I feel more prepared based on the coursework that I've taken because it's practical and can be applied so easily."