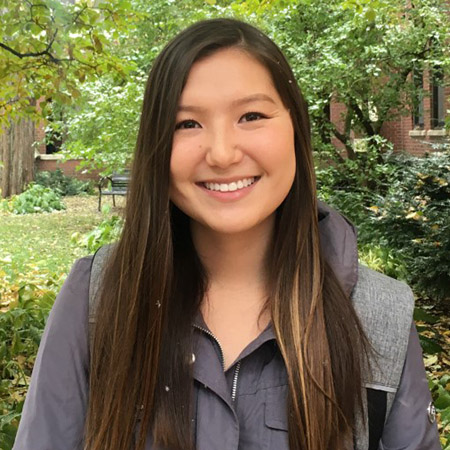 “What we think about [death] is who we’re surrounded by. If we would talk about it more openly, we would have a better point of view about it.”

Natasha Peterson aspires to be a gerontology professor in the future. When Natasha isn’t in the classroom, she enjoys spending time with family and friends, being active, and reading.

Get to know Natasha

Natasha Peterson’s interest in gerontology started early in high school, when she started working at the Westview Care Center nursing home as a certified nursing assistant and home health aide.

“I basically worked in every aspect of the nursing home. There is a huge need for people to take care of older adults,” Natasha said.

That job, along with the passing of her grandmother, contributed to her curiosity for end-of-life caregiving.

Natasha’s grandmother was Japanese and actively involved in her Shinto religious practices as she got older. At the funeral in Japan, Natasha and her family removed her grandmother’s bones from her ashes with chopsticks and placed them in an urn — an honor for the family of the deceased. The experience made Natasha want to explore the vast cultural differences of societal norms that are placed around death and end-of-life preparation.

“Death is inevitable, but we don’t talk about it,” she said. “What we think about [death] is who we’re surrounded by. If we would talk about it more openly, we would have a better point of view about it.”

Natasha contributes to the narrative of end-of-life care by pursuing her graduate degree in gerontology at Iowa State University. After earning her degree, Natasha plans to become a professor of gerontology so she can conduct and implement research in many areas of gerontology while teaching students about the field.

Natasha has already conducted research on end-of-life preparation in older adults. In her research, she found that not many people plan for their death.

“For implementation [of my research], I want to reach older adults. I could create a program for end-of-life planning,” she said.

Natasha will present her information at the Gerontology Society of America (GSA) conference this year.

“This is my opportunity to show off what I’m doing. GSA is pivotal; it’s my place to share my excitement,” Natasha said. “After attending this conference last year, it reaffirmed my interest in gerontology because I saw other people like it too. It wasn’t just me.”

“What we think about [death] is who we’re surrounded by. If we would talk about it more openly, we would have a better point of view about it.”