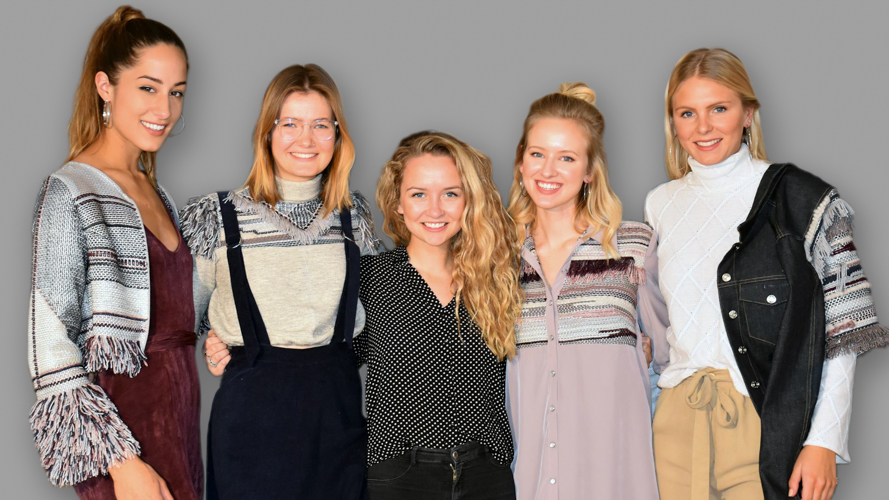 A collection of garments designed by Katrina Pedrick center called “On the Fringe” took Best in Show at The Fashion Show 2018 at Iowa State University. The collection also took first place in the wearable art and senior line categories. Contributed photo

For a second year in a row, a student whose fashion designs were inspired by traveling overseas took the top prize at the The Fashion Show at Iowa State University.

Pedrick’s collection was inspired by studying abroad in Santori, Greece. Creating the collection required hours of practice weaves, experimenting, and inspiration research to make sure she executed her vision to reach its full potential.

“I came across a small shop with purses made with scrap fabric and leather woven together to create patterns, fringe, and a rough mixture of color and texture,” Pedrick described on her website. “I took this inspiration and made it my own in this line. The woven aspect in the garments was executed by weaving yarns by hand, with a yarn needle, through a wide mesh material. The fringe was created by hand with a latch hook tool. The mesh was first sewn into the garment with the other materials, and then I created the woven designs and placements in an as-you-go improvisation manner.” 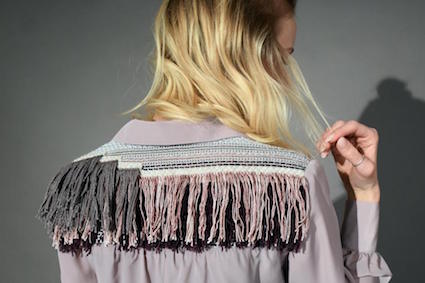 A detail from Katrina Pedrick’s “On the Fringe” collection

“The judges felt the craftsmanship and aesthetics were truly exceptional,” said Sarah Bennett, faculty adviser to The Fashion Show and a lecturer in apparel, events, and hospitality management. “They commented several times that every piece in the collection could be put into a store for sale immediately.  They were impressed with her experimentation of execution of the weaving technique, as well as how that technique was included in pieces throughout the collection.”

Last year, winning student designer Sarah Mader was also inspired by studying abroad. Her eight-piece collection of dresses and a jumpsuit took Best in Show in 2017 and was inspired by traveling overseas to Spain, Morocco, and the Sahara desert.

Pedrick’s collection was among more than 125 student-designed garments featured at The Fashion Show 2018, one of the largest student-run fashion shows in the nation. The show attracted more than 2,000 people and was broadcast live on The Fashion Show’s website.

Pedrick also placed second in the fashion illustration category with her rendering called “Zimmerman,” and third place in the formal wear category for the “Prom dress” she designed.

Winners in other categories

This year’s show attracted a total of 167 entries — 85 of which were accepted for the runway, and 30 which were displayed in mounted exhibitions. Students competed in 20 categories for $16,300 in scholarships. 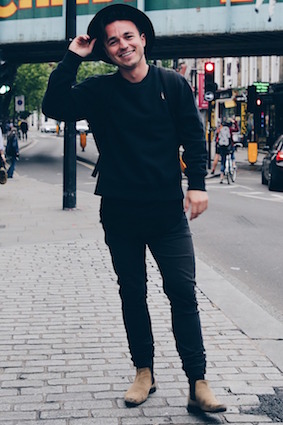 Blaze Best, a senior studying apparel design with a double major in industrial design, was announced as this year’s winner of the $5,000 Todd Snyder Scholarship in Memory of Ruth Glock. Best focuses on studying soft goods and accessories including sportswear, footwear, football and soccer cleats, and athletic equipment.

The scholarship is sponsored by Snyder, a 1992 Iowa State graduate and well-known men’s fashion designer. Snyder has been nominated several times for Council of Fashion Designers of America awards including Menswear Designer of the Year.

Other winners of this year’s Fashion Show are as follows. First-place winners in all categories received $500, while second-place winners took home $300, and third place received $200. 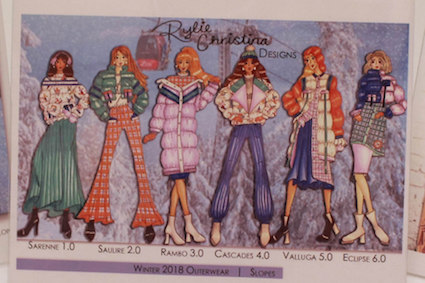 Rylie Smith’s fashion illustration, “Meet Me on the Slopes” 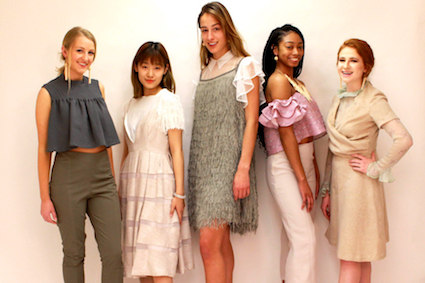 Students also competed for the Lora and Russ Talbot Merchandising Scholarship. In this year’s competition, students had the opportunity to partner with Versona of Des Moines to develop a case study. Sarah Wright, a junior in apparel, merchandising, and design, was the winner of the case study and will receive a $1,000 scholarship.

The theme of this year’s Fashion Show was “Resilience,” a representation of minimalistic modern concepts and organic greenhouse inspired elements.

A crowdfunding campaign from mid-January to mid-February — an online effort that raised small gifts from a large number of people — generated $27,978 from 256 donors, surpassing The Fashion Show’s goal of $25,000. The money was used toward the more than $50,000 cost to put on Iowa State University’s annual fashion show and to award prizes in up to 20 scholarship categories.

The guest designer featured after the show’s intermission was Patagonia, an American clothing company that sells outdoor clothing marketed as sustainable.

Iowa State’s apparel, merchandising, and design program is endorsed by the American Apparel and Footwear Association. It is one of the few apparel programs in the nation where undergraduate students have access to technologies including a digital textile printer, 3-D body scanner, laser cutter, and product development technology and testing lab.

A collection of garments designed by Katrina Pedrick, "On the Fringe," took Best in Show at The Fashion Show 2018 at Iowa State University. Pedrick’s collection was among more than 125 student-designed garments featured at the show, which is one of the largest student-run fashion shows in the nation.

“The judges felt the craftsmanship and aesthetics were truly exceptional. They commented several times that every piece in the collection could be put into a store for sale immediately.“
Sarah Bennett

Winning garments take those who wear them on a journey