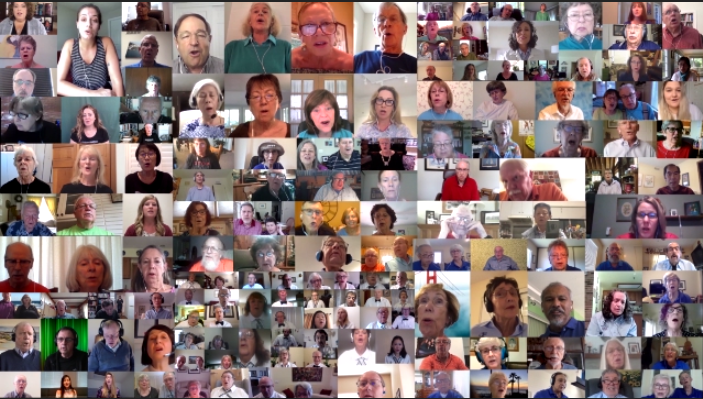 People who sing to alleviate their Parkinson's disease symptoms join together in a virtual choir. Students working in the neurology lab with Elizabeth Stegemöller at Iowa State University helped record and edit the concert.

A virtual choir number sung by 170 people with Parkinson’s disease will debut live at 4 p.m. CT on Tuesday, September 8, online. The performers who sing to improve their motor symptoms — as well as stress and quality of life — were each recorded separately. The recordings were combined by a team of Iowa State University students who work in the neuromotor laboratory with Elizabeth Stegemöller, an associate professor of kinesiology.

The choir’s rendition of “What the World Needs Now is Love” will debut live on Music and Mind LIVE with Renée Fleming, an online series which features the acclaimed singer in conversation with scientists and practitioners who work at the intersection of music, neuroscience, and healthcare.  The event can be viewed from the Iowa State University College of Human Sciences Facebook page, during the debut or any time after.

The groups will come together again virtually on September 30, for a concert on YouTube, as part of their annual festival. At the festival, the individual groups will each perform a number. The directors will also join together as a virtual choir for one of the piece.

The National Endowment for the Arts provides research and communications assistance to Music and Mind Live.