Searching for connection between egg consumption and athletic performance 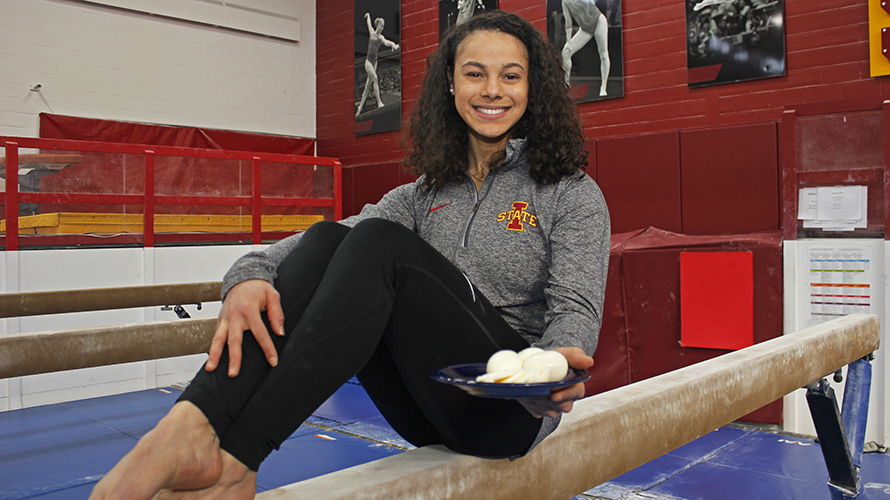 Former Iowa State gymnast Hilary Green knows the impact gymnastics can have on joints. In a recent pilot study, Green looked to see if egg consumption would relieve the overuse and chronic inflammation of gymnasts' joints. Photo by Whitney Sager.

Due to the nature of the sport, gymnasts’ joints take a lot of hits during practices and competitions. Researchers in the Department of Food Science and Human Nutrition wanted to see if regular consumption of eggs would have any effect on joint inflammation.

Food science and human nutrition graduate student Hilary Green, under the direction of Professor Ruth Litchfield, began a year-long pilot study to look at the effect of egg consumption on inflammatory markers among female gymnasts. A former gymnast herself, Green was interested to see if there was any connection between egg consumption and athletic performance to relieve the overuse and chronic inflammation of joints.

They chose to focus on eggs because it is a food source rich in protein and antioxidants. Also, previous studies in individuals with type 2 diabetes and overweight/obesity suggested eggs may have anti-inflammatory properties related to reducing low-grade chronic inflammation.

A total of 13 gymnasts took part in the year-long study, during which the athletes would consume hard boiled eggs post-exercise during the preseason and competitive season. “Our sample size was very small, which limited the ability to see significant changes among egg participants in inflammation, our primary area of interest,” Green said. “Preliminary results suggest there may be something going on. Further research is needed with a larger sample size and a more diverse sample.”

The researchers remain curious about eggs’ potential for athletes and other populations.

“It opens doors to other sports and how eggs can play a role in athletics and sports,” Green said of their research.

“The high-quality protein, including all the essential amino acids, antioxidants: lutein and zeaxanthin, anti-inflammatory effects, and key nutrients like choline, a vitamin-like nutrient pertinent for both the brain and muscle, would be of benefit to various population groups,” Green added.