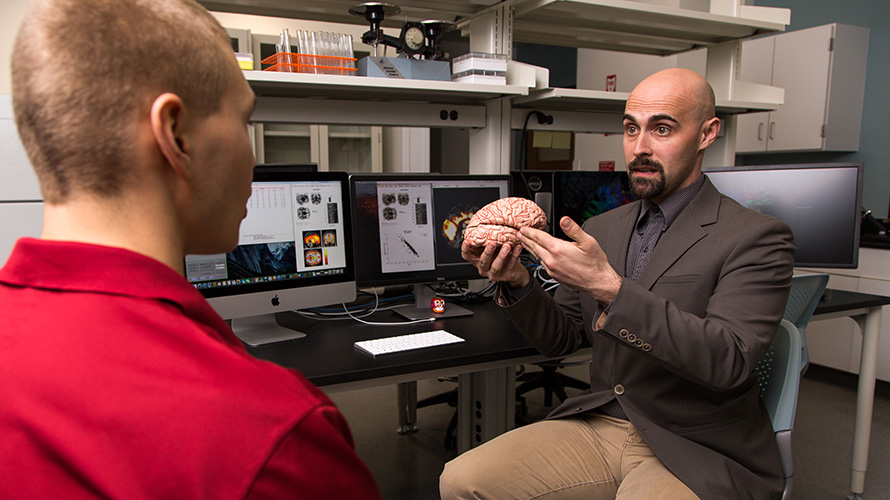 Auriel Willette, assistant professor in food science and human nutrition, has been recognized as one of the top biomedical researchers in the area of neurodegenerative diseases. Photo by Ryan Riley/College of Human Sciences.

Auriel Willette, assistant professor in food science and human nutrition, has been named one of the top 1 percent of 241,215 biomedical researchers in the area of neurodegenerative diseases, as determined by Expertscape.

Willette is known for his research on how metabolic state is related to increased risk for cognitive decline, particularly in Alzheimer’s disease and Parkinson’s disease. He has demonstrated connections between obesity, type 2 diabetes and insulin resistance with the pathology of these conditions. With his unique interdisciplinary approach combining nutrition, genetics and brain imaging, his work has garnered national and international attention. He holds courtesy appointments in psychology and biomedical sciences at Iowa State, as well as in neurology at the University of Iowa.

Since joining Iowa State’s faculty four years ago, Willette’s work has been cited more than 1,300 times, exceedingly above the average for neuroscience researchers. He has published 22 peer reviewed manuscripts in top journals while at Iowa State, and has an H-Index of 20. His most recent published paper discussed how lean muscle mass and abdominal fat are related to fluid intelligence, and how different parts of the immune system underlie these associations in men and women.

“We are very fortunate to have Dr. Willette as a member of our faculty,” said Ruth MacDonald, professor and chair of food science and human nutrition. “This recognition illustrates the quality and impact of his innovative research program that is uncovering the connections between neurodegenerative diseases and nutrition.”

Expertscape compiles lists of the top medical professionals in the industry, serving as a resource for those looking for skilled individuals to treat various diseases. Rankings are based on medical professionals’ expertise in biomedical topics. To be considered an “expert,” Expertscape looks at the number of articles individuals have written and published in medical literature, as indexed in the National Library of Medicine’s MEDLINE database, taking into consideration the quality and quantity of those publications.